For all those who still had doubts that the King of Rock’n Roll is still alive: Here is the proof that Elvis Presley is doing quite well, and will start his comback soon in the first North-Korean Hard-Rock Cafe. 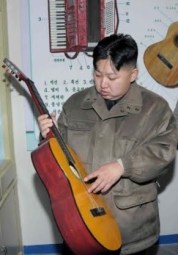 Thanks to ground breaking medical rejuvenating methods in the country, the King looks younger than ever. Rumors have it that Kim Jong-Un, the interims leader of the communist state with its single ruling party will soon make space for the King of Rock’n Roll to take over power. North Korea will soon be renamed Disney Desert and the capital Phoeng-Yang will be Graceland.