We, the scientific community, should no longer be indifferent when discoveries of a great potential to save millions of lifes are wrongly be blamed as dangerous by uneducated green lobbiest like WWF or Greenpeace. We are always asked to think beyond our laboratories, when we do research with an impact on modern technologies, medicine or the environment. But these appeals come usually from activist sides that are concerned with unpredictable horrors of our discoveries (like the atom bomb or the destruction of the ozon layer). But it is also the responsibility of us scientists to defend our discoveries against the neigh sayers, those who dream of a return to a times of religious indoctrination and “gut feeling” instead of hard facts.

Greenpeace is politically lobbying against the free-of-charge release of Golden rice seeds in countries suffering from malnutrition, and therefore blocks a simple and safe prevention of childhood death and retinal disease in adults.

It is of great importance that 107 Nobel laureates have now raised their voice to call the Greenpeace initiative against the genetically engineered Golden Rice what it really is: A politically driven attempt to surpress scientific innovation on the cost of a healthy life of millions of children in Africa and Asia. Greenpeace is politically lobbying against the free-of-charge release of Golden rice seeds in countries suffering from malnutrition, and therefore blocks a simple and safe prevention of childhood death and retinal disease in adults. For this, Greenpeace should be sued from the international court in The Hague. 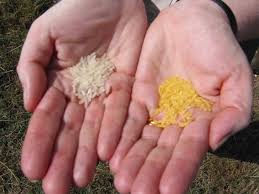 Grains of “Golden” rice on the left side, genetically engineered to produce an extra amount of the natural plant vitamine A precursor beta-carotene

Nobel laureate Randy Schekman, a cell biologist at the University of California at Berkeley, told The Post, “I find it surprising that groups that are very supportive of science when it comes to global climate change, or even, for the most part, in the appreciation of the value of vaccination in preventing human disease, yet can be so dismissive of the general views of scientists when it comes to something as important as the world’s agricultural future.”

Scientific and regulatory agencies around the world have repeatedly and consistently found crops and foods improved through biotechnology to be as safe as, if not safer than those derived from any other method of production. There has never been a single confirmed case of a negative health outcome for humans or animals from their consumption. Their environmental impacts have been shown repeatedly to be less damaging to the environment, and a boon to global biodiversity.

Greenpeace has spearheaded opposition to Golden Rice, which has the potential to reduce or eliminate much of the death and disease caused by a vitamin A deficiency (VAD), which has the greatest impact on the poorest people in Africa and Southeast Asia.

The World Health Organization estimates that 250 million people, suffer from VAD, including 40 percent of the children under five in the developing world.  Based on UNICEF statistics, a total of one to two million preventable deaths occur annually as a result of VAD, because it compromises the immune system, putting babies and children at great risk.  VAD itself is the leading cause of childhood blindness globally affecting 250,000 – 500,000 children each year. Half die within 12 months of losing their eyesight.

The scientific consensus is that that gene editing in a laboratory is not more hazardous than modifications through traditional breeding, and that engineered plants potentially have environmental or health benefits, such as cutting down on the need for pesticides. A report by the National Academies of Sciences, Engineering and Medicine, released in May, said there is no substantiated evidence that GMO crops have sickened people or harmed the environment, but also cautioned that such crops are relatively new and that it is premature to make broad generalizations, positive or negative, about their safety. The value of vaccination in preventing human disease, yet can be so dismissive of the general views of scientists when it comes to something as important as the world’s agricultural future.”