This was really a great news what J.D.Salingers son Matt revealed a couple of days ago: that a whole treasure of yet unpublished texts by his late father Jerome D. Salinger has now been evaluated and awaiting its release to the reading audience. I can not say how impatient I am from now on, to have the first post-mortem new short stories by one of the great figures of 20th century modern literature in hand. 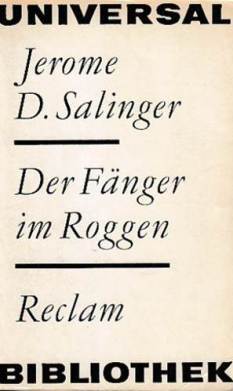 The publisher Reclam Universal Bibliothek was notorious in the GDR for providing the books we were supposed to read for the German lessons in school.

The last text that could satisfy the appetite of Salingerites was a non-fictional, but partly imaginary essay by Frédéric Beigbeder about the relationship between Salinger and Oona O’Neill (Oona Chaplin). But the prospective of reading stories or novels by the master himself is of course another category of shit. Having seen the loss of so many amazing writers durign the last years (Philip Roth, Lars Gustafsson, Amos Oz, to name just a few) always came with the certainty that one cannot expect any new words from their desk and their mind. This was it, finito. You might read their published books again and again, until you know every sentence by heart, but don’t wait for any novelty any more. In some cases, such as Philip Roth, the sadness about the end of an autors productivity in fact already started years before he died physically. In any case, other than for many rock stars who annonced their final concert again and again (to sell more tickets, of course), with writers one can be quite sure that when they say “Last Call” they stay to their promise. And when they die (always too early, of course), rarely are there still unpublished manuscripts in their heritage that can cope with their already published books.

The news from Salingers son, however, could changed this now. As he revealed in an exclusive interview with the Guardian, his father has definitely never stopped writing and that “all of what he wrote will at some point be shared”. Matt Salinger told the Guardian his father “teemed with ideas and thoughts – he’d be driving the car and he’d pull over to write something and laugh to himself – sometimes he’d read it to me, sometimes he wouldn’t. And next to every chair he had a notebook. And these notebooks were filled over the last 45 years of J.D.Salingers life (he died in 2010 at the age of 91).

As Matt Salinger described his father, “He just decided that the best thing for his writing was not to have a lot of interactions with people, literary types in particular. He didn’t want to be playing in those poker games, he wanted to, as he would encourage every would-be writer to do, you know, stew in your own juices.” This sort of reasoning could also come from Thomas Pynchon, and as he has shown so perfectly creates not the worst condition for creating excellent literature.

Editions of J.D.Salinger by East-German publishers Reclam and Volk&Welt. The simple design (without any photographs or graphics) was by special request of Salinger himself.

Therefore, I can hope that soon some new books can be added to my J.D.Salinger collection, which entirely dates from the 70s and 80s. You can see, they all look a bit used, and they are of course all from East-German publishers (Reclam, Volk&Welt). The first one (“Catcher in the Rye” or “Der Faenger im Roggen”) I managed to buy in an export book shop in Prague in 1979. “Franny and Zooey” and “Hebt den Dachbalken hoch” I was lucky enough to grab from the army book store at the baracks in the mid 80s (I had established an illegal traffic network that allowed me to get every rare book before it was put on the shelves). And the last collected short stories “Neun Erzaehlungen” I received directly from the biggest East-German central books wholesaler. There a lady from my neighbors appartment were working, for whom I occasionally did babysitting for her daughter. In the standard book stores it was virtually impossible to buy these books:  The printed copies were to few (just 10 or 20 thousands), and the young people were so much in reading, especially modern american writer. So despite “Catcher in the Rye” is considered one of the most published post war books in the West, economic and political restrictions in East Germany prevented a similar popularity there. Therefore, the story of Holden Caulfield and his peculiar view onto life and the world remained a sort of secret or elite knowledge on the Eastern side of the iron courtain. But with some extra effort and some dealing, everybody could explore and discover Salingers universe for himself.

What is funny, but also sad: When I ask around my colleagues at work or friends here in the traditional West Germany about J.D.Salinger, I soon realize that this name does not sound very familiar to them. For most of them, “Lord of the Rings” and “Karl Mays Winnetou” is the highest form of literature they ever encountered. Therefore my excitement about the prospective of J.D.Salingers hidden books now is slightly over-shadowed by my worries that they wont become best-sellers any more, as were his novels and stories in the 70s and 80s. But for the few Salinger afficionados and literature critics it will become a highlight. I am personally very curious to see if J.D.Salinger continued to write comming-of-age stories in the second half of his life. Would Holden Caulfield become a modern Peter Pan ? Maybe he turns into a stock broker, but in his spare time becomes a political rebel ? A simple continuation of his adolescence life-style over another 40 years would be hard to believe.